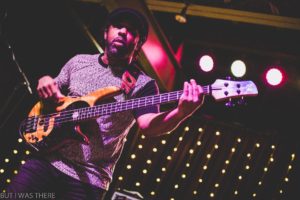 The relaxed musicians stood comfortably on stage, emulating a nonchalant but composed demeanor similar to one who might stand in the kitchen eating a bowl of cereal while contemplating life’s deep questions. Victor Wooten Trio provided a musical approach that can seem simple upon first listen or to the untrained ear. They offer an underlying complexity that grabs the listener’s attention more fervently with purposeful, controlled sound than a performance riddled with wickedly intricate sequences.

Their performance seemed to unfurl organically, in a free flow of notes with ever-changing rhythms that kept the head bobbers and toe tappers constantly reinventing their own body movements in a frivolous attempt to mirror the music. Wooten, Chambers and Franceschini know when to push and when to pull back, leaving ample space for each musician to unhurriedly showcase their style.

In Wooten’s words from a TEDx talk at Gabriola Island a few years back he offered: “To be a good musician you have to be a good listener. Doesn’t matter how great I am as a bassist. We can put five of the world’s best musicians on this stage but if we’re great separate from each other it’s gonna sound horrible. But if we listen to each other and play together, individually we don’t have to be as great and it’ll sound much better.”

Wooten contrived several noteworthy instances, the least of which was casually slipping from electric to double bass. The latter an instrument he less commonly plays, yet fingertips danced across the fingerboard unabashedly. Fusing classical and modern, he even doubled back to brandish his bow across the electric bass to create provocative sounds. Perhaps one of Wooten’s most intriguing acts unfolded as he utilized his loop pedal to create multiple polyrhythmic melodies, adding each note one at a time. The mounting complexity of this sequence mesmerized listeners because of the precision and patience behind it’s development.

The method of slowly building a progression note by note could be traced back to Wooten’s TED talk where he describes music as a language, and one that he learned at a very early age, when he was also learning the language of speech. Just as children begin by learning one word at a time to build their vocabulary, Wooten still applies that same basic principle on a professional stage decades later to communicate with his audience. 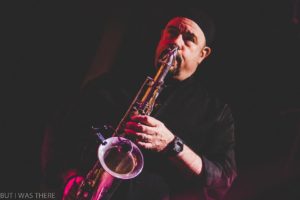 Midway through the evening, Wooten introduced his two comrades before jokingly introducing himself as Stanley Clarke, a prominent jazz bassist. Later on in the set, he treated listeners to a mashup of Clarke originals to the delight of those familiar with his work. The trio inserted other Easter eggs throughout the set, including a Stevie Wonder sample, but even these more recognizable riffs were cleverly disguised, detectable to those listening intently.

What was plainly obvious was Wooten’s almost comically precise ability to manipulate his bass to sound like other instruments. At one point I found my eyes furiously darting across the stage to locate the elusive flute player. Low and behold, it was coming from Wooten’s electric bass. The running joke of the evening was that after talking to him for ten minutes, he could probably make his bass sound like that person’s voice. Perhaps this feat of musical wizardry can serve as his next musical conquest.